Ask four people what the meaning of life is, and you’ll get ten answers. So how is an AI supposed to ask and answer questions like a person? How does an AI connect to the “semantics” – the meaning that connects people and ideas?

In 1964 the first seemingly successful attempt at this was created with the bot, “Eliza”. Eliza was one of the first bots that used the pre-programmed response strategy. Eliza had nothing resembling AI involved – it mostly asked questions and by surprising people, they anthropomorphized it. But what if you could take sophisticated Natural Language Processing so you could start to pick out key words, root words, and even build some light context tracking?

Using this more sophisticated approach and fast forward 47 years to 2011, you have IBM Watson, a major upgrade. Instead of exclusively pre-programmed responses being handwritten, answers are pulled from a collection of massive public databases like Wikipedia. Responses have to be curt, basic question and answers (or answer to question in the case of its historic win at Jeopardy!). Some answers can still be pre-programmed to give the illusion of an AI with some real brains.

Are there other strategies?

Fast forward again to 2019 for OpenAI’s “scary” GPT2. This was a surprisingly simple “attention” model that was trained with an enormous number of online articles to do a sophisticated version of next-word-predictions. In other words, the same thing an iPhone does for autocomplete, but on steroids and trained on very particular types of articles that were upvoted and linked to from social news website Reddit.

At first OpenAI refused to open up GPT2 due to their fear it would create fake media posts in the wrong hands. But the genie was out of the bottle, so to speak. And also, artificial intelligence has never been any match to human stupidity – fake news and media postings are incredibly cheap and easy to generate without AI, was there really any substantive risk? If you don’t trust the source, then believe him/her/them/it at your own risk, that’s the world we live in today. Actually, it’s always been the world we live in, the issues are just amplified by the speed of our world wide web of connected communication.

So OpenAI eventually stayed by their mission and opened up the rest of the details on GPT2. But was this the birth of the semantic AI that could revolutionize the world? We edged closer, learned a lot, but not there yet. It doesn’t take long to reach the rough edges and contradictions of GPT2 when working with it interactively. It’s not surprising given what it’s doing – next work prediction.

Sure, it has a memory of what was previously generated text, which is how it seems to keep a coherent thought, but just like other auto-completes, you can keep on asking for next word forever. If over-trained on the source material, it will just start spitting out the source material verbatim in chunks.

All of these methods are all about text because it’s a one of the easiest ways communication can be codified, stored, and analyzed. Some pretty incredible research has also been going into voice, both voice understanding (which is transcribed to text) and synthesis (which is text turned into natural sounding audio). Emotional AI and other forms of ‘input’ or ‘output’ visual AI, like deep fakes, are other areas of increasing velocity in research with some amazing breakthroughs in just the last year.

There’s no real narrative, no journey, and no destination. It’s a very nice auto complete that writes like us because it was trained on enormous amounts of text written by us.

So we are left with a lot of advancement in AI working in the human realm of language, but there are still some major gaps.That’s where our story begins.

Over the last four years we’ve been building a novel approach on top of shoulders of existing solutions but including some key, innovative differences. First, early on we knew that the question of semantics, of meaning, could not be universal and accurate at the same time. Meaning is individual, deeply personal, and potentially even shifting over time. The magic of good communication is transferring that personal meaning to another human being. Success is difficult to measure because it is dependent upon the equally personal meaning the other individual experiences.

That means that good semantic AI at scale is not about the singular, all-powerful “Alexa”s or “Siri”s in the world, but a collection of specially trained models designed to empower, scale, and reflect real world people. This was foundational to many human-centric applications, such as our AI Biographer, and is the basis for a new form of gig economy through Coachabl.

Personalization comes at a cost of data. We can use the latest techniques such as one-shot learning, but short of a captive audience, we still have to build up an individual model from more generalized base models. Our technique creates a pyramid of such models, that start with a universal base and add traits based on personas/archetypes until at last a singular individual model captures the semantic basis for communication.

It’s a little bit like modeling humanity to make human-centric AI. No matter who you are, where you from, or anything specific to your identity, there is basic human nature, truths, and dignity. Upon that raw humanity there are unique cultures, professions, etc which influence your identity. More common sense than philosophical, we’re all eventually made up of where we are, the people we’ve been connected to, and an inimitable mix of our own personal history and ambitions. This is at least a close approximation, which is enough for basic semantics.

Personalization is great, but individual linguistic interactions – aka actual AI conversations – have to be based on a purpose. Whether it be to greet, to answer a question, to ask a clarifying question, or more complex interactions like coaching someone through a challenge at their work, each narrative is a journey. It has a start, some twists in the middle through interactions, but always an eye towards the end goal.

This is where our proprietary AI kicks in: built with models enhanced by computational linguistic layers, continuous and active learning, and utilizing the semantic language transfer of the personalized models. This accomplishes an interactive dialog that can continuously readjust to create that crucial narrative arc, change destinations altogether, or be an active participant with the human side of the conversation who, themselves, are leading the dialog to a destination. 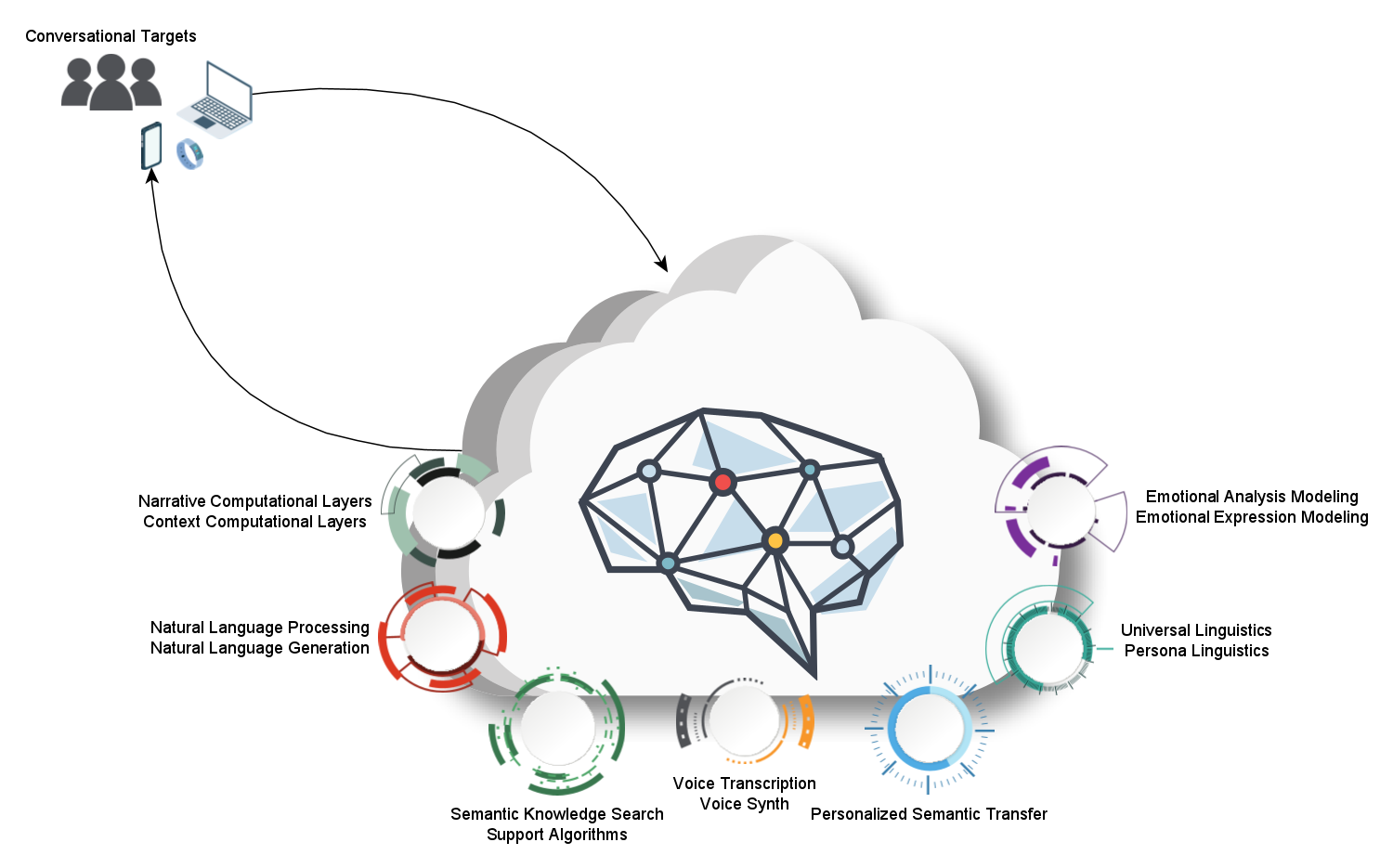 Much like modeling centers of the brain, the semantic-narrative AI uses an ensemble of models working in tandem.

Once you have a narrative AI, things can get really interesting. Applications we’re pursuing include many types of communication, beyond coaching and AI assisted journaling/AI Biographer. AI is already generating art, but it’s questionable if that’s a creative process. If it’s communicating, telling a story through art, making a point, is that not the heart of a creative process – to share an idea with beauty? If this is the extension of a real individual, can you not argue it has just as much “soul” as any other art?

That’s one of many ways we’re experimenting exchanging the language elements for visual expressions. And once this tool is complete, can it be extended further to personalize and creatively collaborate with a person to change one type of communication into another? What does your love letter look like as an expression of paint and canvas, or as a symphony?

Is software a science or an art? Can we communicate in English to our AI who can weave a narrative back as a set of Domain Specific Languages (DSLs) and human-centric design concepts? These ideas are powerful not because we’ve built a sci-fi, terrible, and alien Singularity AI. Instead we can accomplish more by thinking of an AI as tool to extend our own humanity into this digital frontier. Narrative AI by nature must rely upon the collaborative human experience – the ghost in the machine is we, ourselves.

And thus, the true nature of today’s most powerful AI is the same as technology has always been since the discovery of fire. We use technology as a tool to extend what we ourselves can achieve. At Tinman Kinetics, we believe this is the bold vision for AI this decade – technology with heart.

The 2010 decade marked a dramatic change in innovation and the evolution of progress in several industries. Starting with the adage that the government can only access space but now look at the